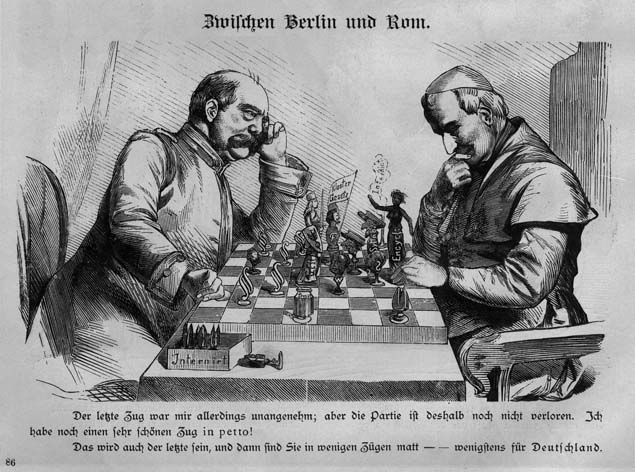 After the founding of the Reich, Imperial Chancellor Bismarck (1815-1898) drives forward his efforts against political Catholicism (the Central Party and the Catholic church).

In the following 15 years various measures are undertaken by the Prussian government to this end, such as closure of the Catholic department in the Prussian Ministry of Education and Cultural Affairs, the imperial act against political claims to ecclesiastical office, the banning of the Society of Jesus (1872), the blocking of state subsidies for the Catholic church (1875) and the dismissal of the bishops of Cologne, Münster and Paderborn (1876).
The most important Catholic counterpart to Bismarck in the German Reichstag parliament is the politician Ludwig Windthorst (1812-1891). The conflict settles down after 1880 and ends with Bismarck's Peace Laws of 1886/87.